When the Big Muddy Turns White

The question always comes up when you're sitting on the riverbank in winter, watching and listening to the ice flow by. "I wonder where that ice comes from?" We try to imagine what event, what special place or kind of place was creating all this ice then shooting it down the river at us.

From what I gather, most of it is created everywhere in the river (where it's below freezing). Most of the ice is called frazil (or frazzle) ice. It is formed when small, needle-like ice crystals actually form in or on the surface of the water as turbulence in the river causes some of the water to become supercooled, or just below freezing. These ice slivers begin to stick together, creating a slush. The current gathers the slush together and the frazil pieces begin to freeze to each other. The tumbling action of the current and of slush blocks hitting each other and rolling off the banks forms these circular "pancake ice" or "frazil pans". We call 'em ice floes.

It's sort of like the river is so cold it oozes slush, which floats to the top and paints this ever melting, ever freezing, always changing floating sculpture.

On very cold days, near zero, delicate frazil structures can build up on the pans. As pans bump into each other, they may tilt up, then freeze to another pan, creating some of the towering iceberg structures.

On the Missouri, one of the most interesting things to me is how the ice appears white, despite the turbidity of the water. 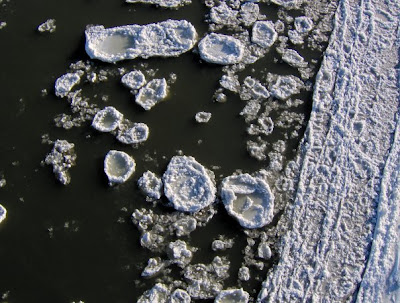 Looking down from Boonville Bridge. photo by Brian Waldrop.

Another ice formation you might see are large sheets of ice that break out of tributaries or in the eddies along the side of the river. If there is frozen border ice along the river and the river drops or rises dramatically, these sheets will break loose and go on down the river.

I've seen some as large as a row of barges. Awesome.

Blogmaster Note - Several years after this was posted, a Columbian Missourian reporter saw it and decided to write an article, interviewing several of my friends. "The Science behind Ice on the Missouri River" by Christopher Aiken, Jan. 16, 2015.

Check out this super cool video we put together from time lapse photos of the frozen Missouri River near Boonville, MO. Soundtrack by David Dearnley (https://www.reverbnation.com/daviddearnley)