Two Honors in One Week!


Last week, Missouri River Relief was humbled to receive two really cool honors in one week. We're not letting it get to our heads, but we do want to brag a little bit. Of course these recognitions are really honoring the work of the dozens of River Relief Crew volunteers and thousands of river cleanup volunteers and partners that actually make it happen.

First of all, we received our monthly copy of the Missouri Conservationist in the mail. This high quality and educational magazine lands in the mailboxes of 1/2 million subscribers for free each month. (Missouri residents click here to subscribe)

The back cover is always a nice photo and story about normal citizens working for conservation in their communities - a feature called "I am Conservation". This month, there was a photo of Steve Schnarr and Melanie Cheney from MRR! What an honor to represent the thousands of volunteers that clean up the Missouri River.
Click here to check it out online -

Then, later in the week, we were honored to be awarded the "G. Andy Runge Award" from the Missouri Chapter of the Wildlife Society in a banquet room full of our conservation partners from across the state at the Missouri Natural Resources Conference. We had been nominated for the award by Ashley White, a Resource Assistant for the Mo. Dept. of Conservation that had driven boats at several of our river cleanup and education events this year. Her submission statement is below.

Here are the words from these two honors - 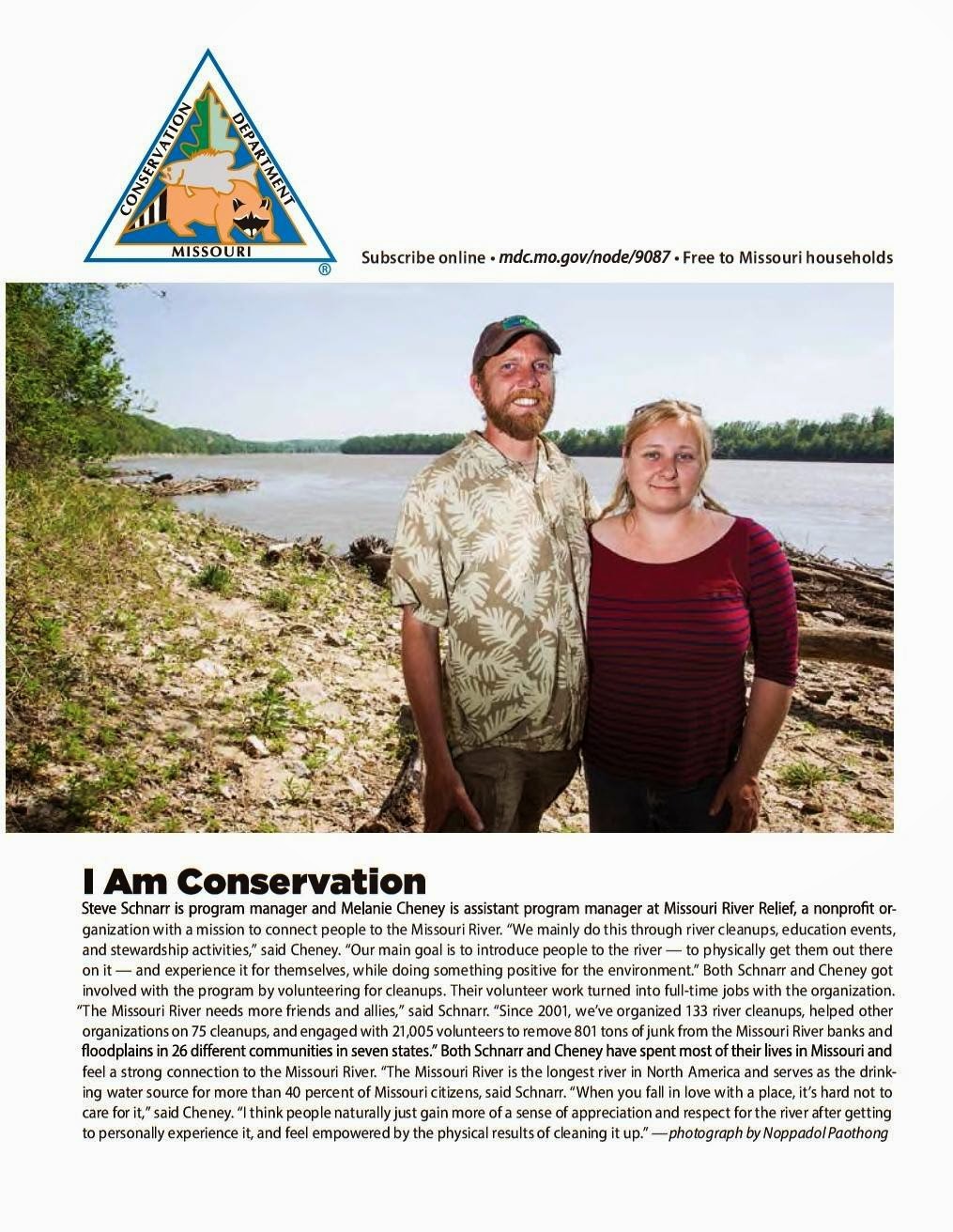 Steve Schnarr is program manager and Melanie Cheney is assistant program manager at Missouri River Relief, a nonprofit organization with a mission to connect people to the Missouri River. “We mainly do this through river cleanups, education events, and stewardship activities,” said Cheney. “Our main goal is to introduce people to the river — to physically get them out there on it — and experience it for themselves, while doing something positive for the environment.”

Both Schnarr and Cheney got involved with the program by volunteering for cleanups. Their volunteer work turned into full-time jobs with the organization. i am conservation 02 2015“The Missouri River needs more friends and allies,” said Schnarr. “Since 2001, we’ve organized 133 river cleanups, helped other organizations on 75 cleanups, and engaged with 21,005 volunteers to remove 801 tons of junk from the Missouri River banks and floodplains in 26 different communities in seven states.”

Both Schnarr and Cheney have spent most of their lives in Missouri and feel a strong connection to the Missouri River. “The Missouri River is the longest river in North America and serves as the drinking water source for more than 40 percent of Missouri citizens, said Schnarr.

“When you fall in love with a place, it’s hard not to care for it,” said Cheney. “I think people naturally just gain more of a sense of appreciation and respect for the river after getting to personally experience it, and feel empowered by the physical results of cleaning it up.”
—photograph by Noppadol Paothong, text by Cliff White.

Given to Missouri River Relief by the Missouri Chapter of the Wildlife Society
submission statement by Ashley White, MDC.

While working as an hourly for the MDC this summer, it has given me so much more than merely an income.  As someone who has been passionate about the river, I couldn’t believe my fortune when I was hired on as part of the HAMP crew to work out on this beautiful river every day.

However, having this passion within just me is commendable, but being given a medium to spread this message to others was the real treasure I found in several people here at the MDC.  Those people are the resource scientists at the Chillicothe Field Station who led me to the Missouri River Relief (MRR).  Up until I met these wonderful people I had done events on the river such as Race to the Dome and the MR340, but I wasn’t promoting stewardship or conservation in others like I wanted. These scientists told me about their involvement with MRR and I knew immediately I wanted to join this movement. (Note - the biologists from the Chillicothe Missouri River Field Station were awarded Missouri River Relief's "Partner of the Year Award" in 2013-these folks are incredible allies!).

Since then myself, and these scientists, have been a part of the Brunswick, MO cleanup, the Boonville, MO cleanup, and you can be sure boats will be going this coming weekend to the Jeff City, MO cleanup and Hermann, MO cleanup in a couple weeks (and these are just cleanups that I became involved in, their involvement with cleanups go back years before my time).  While it has been a great experience getting to meet everyone involved in MRR, I have also used my new-found affiliation with them to bring friends of mine into the fold.  This continuation of stewardship and conservation is invaluable, as that is how others learn to value these qualities, and rather than let the legacy flounder with one person, they spread the word to others long down the road.

The work the MDC has been able to be a part of in conjunction with MRR is almost too much to take in.  During the last two cleanups alone, over 280 volunteers of all ages have gathered in Boonville or Brunswick and hauled away more than 5.5 tons of trash from Missouri’s rivers.  This has included the big, ugly trash like 66 tires, refrigerators, 55-gallon drums, and freezers, all the way down to thousands of bottles of all shapes and sizes.  Looking at just this summer’s trash totals, they sound pretty impressive, but in the 14 years MRR has been pulling trash out of the river, they have hauled in 756 tons of trash by almost 20,000 volunteers!

All of this work came to fruition in 2001 when a few people in mid-Missouri “simultaneously recognized the need for engaged stewardship of the Missouri River and the desire of citizens to take part in watershed solutions” (“About Missouri River Relief”).  Since 2001 they have showed no signs of backing down and my hat truly goes off to them for the hours of planning and coordination that goes into pulling off one success after another in terms of conservation and increasing stewardship.

While the trash haul is so overwhelming, the really astounding part of all this organization does, and there is a lot, is the education.  If you talk to anyone on any MRR boat they will tell you everything you ever wanted to know about the Missouri River.  This includes how the river used to be viewed in terms of conservation, how it is viewed now, and where they would like to see attention in the future.
Attracting hundreds of volunteers to a cleanup says a lot about the atmosphere surrounding people in these river towns and beyond: they are there and ready to step up and take a stand to keep the Missouri River beautiful, just as these founding members in 2001 realized.  And it is not just adults who believe this, but children as young as grade school.  I’ve seen them out there running around like maniacs trying to pick as much trash as they absolutely can, and asking the challenging questions that future generations will have to ask in order to continue this legacy of conservation started by MRR just 14 short years ago.  The work MRR does in local schools to help further this knowledge in children is really them investing in our children and our river’s future, something that it is often hard for others to grasp the importance of.

In conclusion, I hope I have conveyed to you the importance this fine group of people have played in my life, and the lives of all the people we can impact together thanks to their involvement in conservation, particularly the conservation of this amazing resource we have right here in our own backyard which so many take for granted, the Missouri River.  So, I would like to formally nominate Missouri River Relief Organization for the G. Andy Runge Award for their outstanding work educating and offering up their time in service to our beautiful state and its resources. 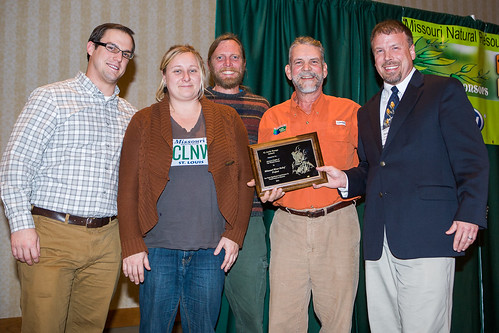