A Hot Day in the Old Town...Again

St. Charles Missouri River Clean-up
August 11, 2007
text by Steve Schnarr, photos by Dave Marner
The major thing on our minds as we got ready for our August 11 clean-up in St. Charles (our fifth in old San Carlos) was the heat. We made plans for extra water, extra pop-up tents, a couple on site cooling area and extra water… We decided to bring people off the river a half hour early and to keep the sites close to home base. And we made sure to have lots of extra water. 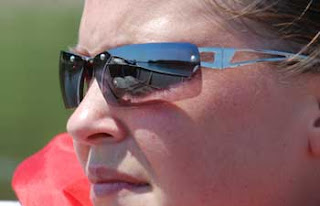 We weren’t the only ones with heat on our minds. Craig Holt, our oldest St. Louis-area regular, was already on site when we showed up in the morning with a cooling station set up at the base of the ramp and a couple jugs of iced water and Gatorade. Bob (didn’t catch his last name) from the local CERT team showed up with a mini-ambulance, a fan, a tent with a cot, and a bunch of cooled, wet towels.

We had 250 signups on our website for the day, but didn’t know how many folks would look at the forecast Friday night and still think it was a good idea to scramble around the banks of the Missouri River digging out trash. They started trickling in early. The Meremec Strike Team were there an hour early, ready with a bag of tools, extra water and a gas-powered chop saw.

Just as new boats were freed up, more volunteers arrived, and pretty soon we had 144 people working hard on the river. A lot of regulars showed up, along with Fox TV and KTVI. We took a bunch of new folks on the river, many for their first time, and tackled some wicked spots.

The Meremec folks went at a 61 Impala half buried in the bank, with another crew tackling an old dumpsite near the Blanchette Bridge where we had worked every year we had been in the area. Folks scoured the Frontier Park riverfront. 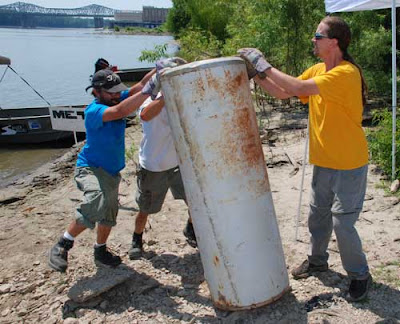 A spot that had been our major dumpsite last year, absorbing over 50 volunteers and yielding more than 100 tires, was almost clean. A cooperative effort between the City of Bridgeton and Great Rivers Greenway had turned the area into a beautiful park with a riverside trail and bridge. Access to the dumpsite had been blocked off and a major blight on the riverfront was eliminated.

Meanwhile, another reclamation activity was going on simultaneously. The vehicle of a woman who had been missing for several weeks was found Friday by search crews dragging the bottom of the river. It had drifted several hundred feet downstream from the ramp she drove into the river at, where we were launching boatloads of volunteers.

A boom crane was brought to shore, and the truck was lifted in one piece from the bottom of the river. By the time lunch was served they whole operation was being packed up and the vehicle hauled away to be searched.

At this clean-up, we made a special effort to recruit other Missouri Stream Team members, and it really paid off. At least 16 teams were represented, including ourselves (#1875). 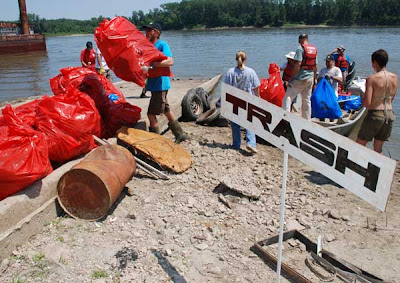 Thanks to our hardcore volunteers Ruthie Moccia and Dareth Goettemoeller, we showed off our newly stenciled crop of lifejackets. They had painstakingly stipple painted all the new jackets, and scraped and touched up a slew of the old ones. They looked fantastic in the St. Charles Journal article by Steve Pokin, which you really should check out by the way. He did an excellent job of describing the experience of being abandoned on the riverside with one job in mind: cleaning up the riverbank.

That evening, we retired to our hotel (courtesy of St. Charles Convention and Visitor’s Bureau and Quality Inn) for our usual St. Charles urban clean-up experience. Instead of eating gathered around a campfire, we hunkered down in the “Lewis and Clark” meeting room with plates full of food Jeanie Kuntz had prepared at home, hauled to St. Charles and heated up in crock pots.

Our photographer for the day, Dave “the River Slave” Marner took us out to see some of his buddies play blues in the 120+ year-old Corner Bar, featuring the most amazing harp player I’d ever seen in such tight quarters. We even got to play the old three-pin bowling game downstairs (manned by a swift high schooler rolling balls back and setting up pins) before being kicked out by the group who had rented out the space (oops!). I have to mention that I got three strikes in a row…

Here's the results from the day! 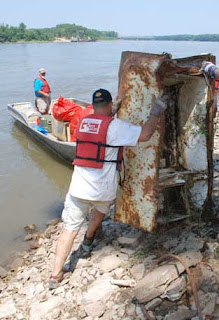