This morning started with a short cup of coffee, some granola with blueberries and some stretching exercise. I knew I had to fuel up well this morning as I was to accompany a River Relief “Tiger Team” into some gnarly river-side woods to finish up bringing out the last big items of trash discovered during two recent forays into the area by two different groups of crew members.

The area is owned by the US Army Corps of Engineers (theoretically, that’s you and me, with others). It lies along a functional chute through an area that has been known as long as I can remember as “Party Corner”.

Out along the road that runs along the property and beside the river, just about every weekend different groups of nature lovers shamelessly drop their beer cans, garbage, fireworks wrappers, used diapers and worse. We have cleaned up there many times.

This project was special, however, as we were to go into the thick of this wedge-shaped parcel by boat and attempt to clean it of all of the flood deposits of trash from the last decade. The USACE had contracted River Relief to do the job in return for a modest amount of much needed cash. It was a project that our executive director made happen in the hopes we could knock it out quickly with a minimum of expense.

So in went the four of us around 9 a.m., just as the temperature and the relative humidity both hit about 88. Sweat was copious just trying to walk into the stashes of refrigerators and tires through the knee-high Japanese Hops (an invasive vinous plant whose leaves irritate bare skin) and over the numerous hidden down falls. It was hot, sweaty and miserable work.

As Jeff and Alex carried tires and barrels out to an open spot on the high bank, Steve and I went to work with a chop saw on a mud-filled refrigerator Alex and I had disinterred on the first go-around.

Thank the gods for power tools!

Refrigerators are difficult to deal with when embedded as sawing them up entails fighting the foam insulation infused with mud that drags the saw blade speed down so that the only way to make progress is with little bites and chewing thoroughly. We then packed all of the pieces out to the river bank cache.

The boat was then carefully brought down and the heavy objects lowered down the bank with a rope and carried into the boat. In about an hour and a half we were done there and panting in the boat between deep draughts of cool water from the water jug.

Grimy all over, we agreed with Jeff’s idea of going across the river to see if we could spot through the recent growth the two refrigerators seen on a high bank during a previous trip through that area.

Sure enough, eagle eyes and honed institutional instinct soon spotted both of them. One by one they were lowered down the bank and wrestled into the boat. After a careful round-to, we turned on the air conditioner (throttled up on plane and made our own breeze). All of us were wet down to the knees with sweat. 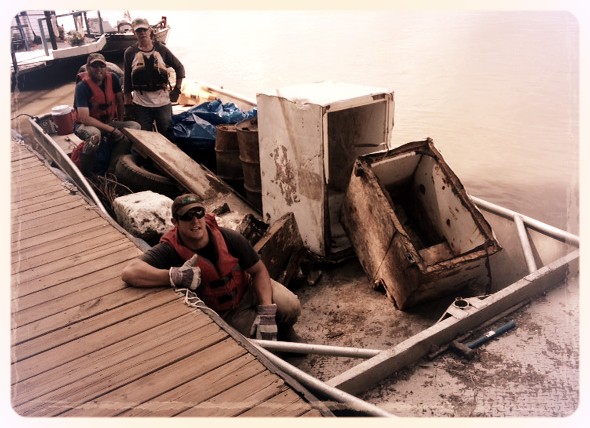 Soon we had the nearly full 24 foot “Hildy” on her trailer and headed for the scrap dealer’s and the land fill. A small job, truthfully, but in essence our history is one of many “small jobs” knitted into a body of work that has affected many people and communities in over 700 miles of the Missouri River over the last 13 years.

It truly is a disease and we have it bad.
Yeah, today was hot enough for most anyone.

The work was cool enough for us.

See you on The River!

Posted by bigmuddygirl at Wednesday, June 04, 2014 No comments: