The Missouri River is home to fascinating creatures, as well as many issues. That is why we felt it was necessary to develop information packets about the Missouri River. 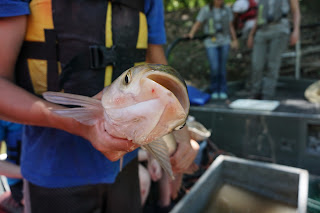 Each topic is accompanied by a summary description of what it is, why it is, and why it is important to the Missouri River. Listed below are the topics and links to each information packet separated into three main categories: 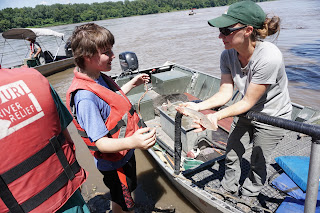 1. This species is native to eastern Asia but were imported to the United States in 1973, primarily as a biological water quality control mechanism in fish hatcheries to clean up excess plankton in the water. The fish escaped these impoundments during flood events and were introduced into free-flowing rivers, such as the Missouri River, where they flourished and spread. WHO AM I?

2. The human process of straightening and deepening channels in rivers. Primarily, it is done to make the river easier and safer for larger boats to pass through, to provide a channel that is stable and unchanging, and to protect developed cities and towns from river meander. WHAT AM I?

3. This species was commercially harvested from the mid-1800s until they were listed as endangered in 1990. They were harvested primarily for their valuable eggs to make caviar. However, by far the largest threat to this species is thought to be habitat alteration associated with dams and channelization. WHO AM I?

4. The water that comes from industrial wastewater, home sewage, and rainwater runoff funnels into a single pipe going to a treatment plant. When there is too much runoff, such as after a heavy rainstorm, the single pipe cannot handle the amount of runoff and wastewater and the water must be sent somewhere else. For cities along the Missouri River, the Missouri River is where that overflowing waste ends up. WHAT AM I?

5. BONUS QUESTION: Originally, from the seas of Eastern Europe and Central Asia, this species was accidentally brought over by cargo ships coming into the Great Lakes from the Black Sea. This species can spread so quickly because not only do they reproduce in huge numbers, but they can also survive multiple days out of water, allowing them to be transported on boats and other equipment. They were found in Missouri in 1991 in the Mississippi River. By 1999 they spread to the Missouri River near Sioux City, Iowa. WHO AM I? 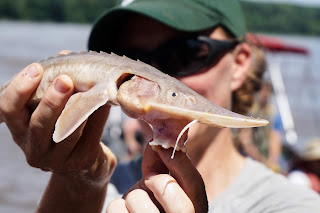 Thank You for Your Support!

A big thank you to the writers and designers of the information packets! This included:
We also could not have done it without the help from our numerous agency partners, these packets include expertise from Aaron DeLonay, Duane Chapman, Barry Poulton, Matt Strukhoff, Susannah Erwin, Carrie Elliott, and Rob Jacobson at the U.S. Geological Survey and Darby Niswonger, Chris Newbold, Bob Rives at the Missouri Department of Conservation.

If you would like to learn more about MRR education programs, please contact Education Director Kristen Schulte at kristen@riverrelief.org, and check out our education program page!
Posted by Missouri River Relief at Thursday, September 27, 2018 No comments: