If you haven't heard the news yet, here is the official word from race organizer Scott Mansker via the MR340 (Rivermiles.com) forum:

After consultation with the United States Coast Guard, Missouri Water Patrol, the National Weather Service, a USGS Hydrologist and numerous veteran paddlers, the decision has been made to postpone the race due to unsafe conditions both current and predicted for the Missouri River 340 race course. This is both a difficult and easy decision. Difficult because of the scope of work and effort put forth by ALL of us involved, including all paddlers and ground crews... and easy because I have zero question in my heart or mind that the river will not be a safe place for an ultra-marathon event next week.

The 5th Annual Missouri River 340 will be held August 24-27th. Mandatory safety meeting and sign in on the evening of the 23rd. Everything scheduled exactly the same, except for the new dates.

For those who are still signed up for the race, but cannot make the new date, you will have the opportunity to sign up for a seat in the 2011 6th Annual event at no charge. Everyone will get an email with instructions on how to do this. You should receive this email by noon Thursday. If you have not, please send an email to either karin@rivermiles.com or scott@rivermiles.com and we will send you the link allowing you to get the voucher. Please do not send your request via the forum. Email will be more efficient. Each member of a team that is seeking a voucher will need to do it independently.

The deadline for deciding if you can do this year's race or next is August 11th. If you have not requested a voucher by then, we will assume you are racing August 24th.

If you are planning to race August 24th with your same team configuration, you need do nothing. Everything is set and all is well. If you need to reconfigure your team in any way, this would need to be done by email. Either to scott@rivermiles.com or karin@rivermiles.com

New paddlers wishing to sign up for the race, now 5 weeks away, may do so on our registration page here:
http://fs10.formsite.com/KevinPayzant/form457183630/index.html
We are still limited to 340 boats. Which I'm sure we'll be well under after the date change.

Thank you for understanding that this decision was not made lightly and that all inconveniences are understood and we empathize. It is not easy for us to reschedule and I know it is not easy for you. But we look forward to a fun, safe event in 5 weeks. Late August is a beautiful time of year on the Missouri and we have every reason to believe it will be the best 340 yet. We hope to see everyone at the safety meeting August 23rd.

Very truly yours,
Scott, Karin and Russ
Posted by bigmuddygirl at Friday, July 23, 2010 No comments: Race to the Dome
Hartsburg to Jeff City
July 3, 2010
text by Steve Schnarr, photos by Dave "the River Slave" Marner, Diana Dexter and Caanan Cowles
Sometimes you finish an event, look around at all the smiling people and realize: this is the first year of big deal.

That’s how it felt for me at the end of the Race to the Dome. People were glowing, and you could see that this thing could be big.

66 boats went in the water. Amazing for the first year! But ever since the MR340 took off, it’s seemed like the growth of paddling recreation on the Missouri River has not hit its limit.

A great diverse crowd showed up at Hartsburg Landing. Some fancy boats were already in the water when I showed up: some folks training for the 340 had put in upstream earlier and showed up for the race by water. Other trainees were planning on heading down to Hermann after the race finish. There were aluminum canoes borrowed from Jeff City Parks – some folks didn’t have their own boat and had never been on the river. In my opinion, a race like this is a perfect time for people to get their “riverlegs”. You’ve got safety boats in the water in case something goes wrong. You’ve got other paddlers to help you find the safe, fast water. You’ve got lunch waiting for you at the end.

Because of the high water, racers were separated into heats so there was plenty of room in the eddy at the bottom of the ramp. All race heats were launched without issue (except the sucking mud on the ramp left by the recent flooding). It just made things really complicated for timekeeping!

Several spectacles were on hand as well. Big Muddy Adventures showed up with John Ruskey’s handmade Junebug canoe, taking out a group of folks for a gentle paddle downstream for a donation to River Relief. At the Noren ramp, the MR340 Dragon Boat, carrying 20 paddlers (!) jammed up the ramp for a while taking off. What a sight!

Only a couple of boats spilled. One guy self-rescued right in the middle of the river. Another bunch swamped and lost their paddles. Luckily, we had an extra kayak paddle in our safety boat and they could get on their way.

One of our safety boats was able to take a couple of our most dedicated sponsors, Pat Jones and Jamie Coe, out on the river. What a great time to get out there and see all these folks out enjoying the river.

Jeff City’s own Matt Green and Kevin Schwarz of the “Aquaholics” took men’s tandem kayak and were the overall winners (1 hour 10 minutes!!!!). Our neighbor, Jodi Pffeferkorn and her partner Charlie Lockwood (“Pfefferwood”) were the first back to the ramp, 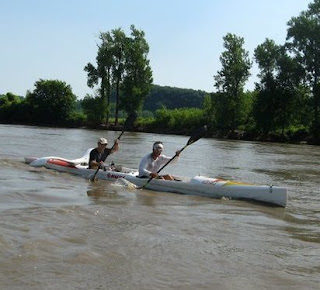 winning the mixed tandem class. They’ve been training for the 340 as of late and are looking good! See them at the 340, too. Past 340 winner Bryan Hopkins (“Lucky 13”) took the men’s solo kayak race by a landslide (mudslide?). Carp Target Grannies from Columbia floated in from upstream and ended up ruling women’s tandem. I’ll post other winners as I get them.

Plus, we had several River Reliefers in the race. Janet Moreland (the first person to sign up for the race – “Easy Rider”) took silver in solo female kayak, followed by Allison Kellenberger (“Mother of Pearl”) in her first race. Melanie Cheney and Liz Doubet took second in their class (“Muddy Bottom Gumbo Gals”). David Lackey ("Water Lily") took third place in men's solo kayak! We were all so proud!

Complete results are posted on the Race to the Dome website.

After we finished up cleaning up after the race, several of us loaded up Big Muddy Mike’s canoe and headed upstream to our high sandbank camp. Music, campfire, veggie packs, lots of swimming, sunset boat ride. That’s the way to celebrate independence! Posted by Missouri River Relief at Friday, July 09, 2010 No comments:

Race to the Dome
Hartsburg to Jeff City, MO
July 3, 2010
Text by Steve Schnarr, photos by Caanan Cowles & Diana Dexter
This was the inaugural year for a really good idea. A 16-mile paddle race ending across the river from the state capital: Jefferson City on Independence Day weekend. Pulling off even such a simple idea is not quite as easy as you’d think. But when you start with a great idea hatched by a tenacious, well-connected dude with gobs of skills – it looks easy!

For me it all started with a phone call. Patrick Lynn from Jefferson City had hoped to paddle in our Flying Carp race, which ended up (perhaps unwisely!) getting cancelled due to high water and drift in the river. But after the cancellation, he rang us up and said he wanted to organize a race for charity from Hartsburg to Jeff City. And he wanted us to be the charity!

We had recently done a clean-up at Noren Access in Jefferson City, and were starting to develop a great set of friends there. One great couple is Andy and Leisha Neidert – who started bringing their boat to clean-ups in the area and diving in. A real couple of river rats, they live on the bluff upstream of Jeff City, overlooking the river. Patrick is friends with Andy too, so Andy agreed to help and it was on. As the day approached, our friends at MRCN had to cancel their race due to major flooding in Glasgow, and the river looked like it was going to be high all summer. But then it stopped raining. The week before the race, it was becoming clear that we might be able to pull this off. The projection of 2 feet below flood stage held.

Patrick worked this race with dogged dedication. Hopefully next year this thing will grow enough to pay the dude – but he insisted on taking this on as a volunteer this year. He coordinated everything himself, from food for racers to corporate sponsorship; from organizing race classes to staggering heats; from race publicity to making sure there were water bottles. When something didn’t pan out, he didn’t blink – on to plan b.

He started advertising the race months before – the first news story was back in April. He did Twitter, he did Facebook. He got cool stickers made. If we offered half-baked ideas from our experience, he’d run with it and make it happen.

For us at Missouri River Relief, nothing could have been easier than working with Patrick Lynn on this race. Where Patrick really shined was the day of the race. He worked his butt off all day long, conducting the race start, answering never-ending questions and solving problems on the fly. Watching his persistence as he recalculated times (an admitted history major) it was clear he was finally going to sleep great that night.

Beyond his unbelievable generosity to our organization and cause, his most admirable quality was among the chaos of hundreds of people dragging boats through the Hartsburg lot or waiting for their lunch at Noren, Patrick would answer your questions with a smile and real appreciation.

Oh, and he’s great with a soundbite: “I grew up near the river and didn’t really start getting out and enjoying it until a few years ago,” he said. “It’s a great resource here in Jefferson City and needs to be utilized more.” Bingo…

Patrick, you’re a truly kind soul, and we can’t thank you enough for what you’ve done for us and for our mission of connecting people to this amazing river by getting out on her.

But he’s definitely not the only one to thank for making this race happen. The list is actually pretty long:

Partners -
Alpine Shop – donated lip balm for racers
Big Muddy Adventures – donated proceeds from a ride in the 22-foot wooden Junebug canoe
Dexter crew – showed up, helped patrol the race and took gobs of great photos.
Jefferson City Parks and Recs – donated canoe and paddle rental.
Joe Wilson – the host with the most
Lafarge-Neidert – graphic design
Lynn Family - registration
Mid-Missouri Amateur Radio Club – Set up stations along the route (some in boats, some biked out the Katy Trail, some on decks of friends over looking the river) and kept all stations in communication.
Missouri American Water – donated gift bags
Neidert family – safety boat – and everything that needed doing
Schnucks – donated gift bags & drinks
St. James Winery – prize wine!
And without a doubt the Missouri River Relief crew solid as a rock! 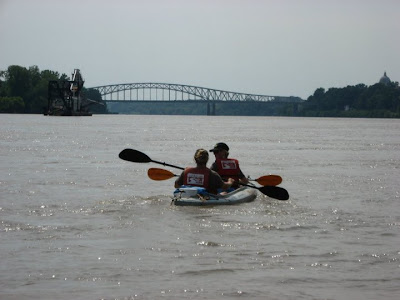